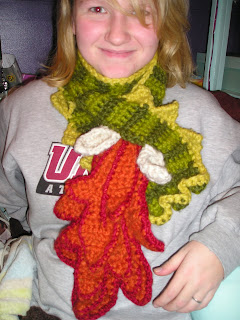 It turns out my boyfriend had my camera in his room even though I called him before I even started searching and he said he didn't have it. So I searched my entire room, then I logged on to Craftster.org , read all the wonderful comments that were made on my Dragon Hat post and then I literally tore my room up all over again looking for the camera, so excited was I to show off my Dragon Scarf. So here it finally is! TADA:

Imagine that paired with my little brothers Dragon Hat. I think it will look cool. I also just realized that I am wearing the same sweatshirt in all of my photos but thats because that's my lounging gear. I often crochet when I lounge.

I crocheted this with my standard thick and quick wool-ease yarn. For the flame I crocheted the bottom flame in one piece and then layered some crocheted triangles and smaller crocheted flames on top of it. I can probably whip up the actual pattern but it basically consisted of a lot of increasing and decreasing. Here are some close ups of the scarf: 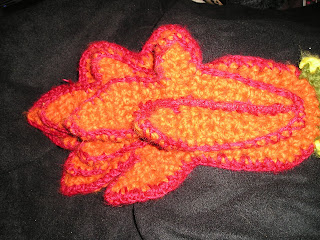 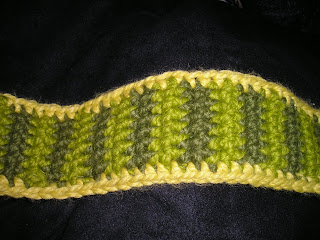 I made the scarf itself thin enough to wrap around Georges (my little brother) neck. I basically just single stitched two rows of one color, then two rows of the other and so on and so on. It was 8 stitches across total I think. I also lined it with green flannel, so that it wont be too scratchy (even though I don't think the yarn is scratchy at all, but you know little kids). It was my first time lining anything, but I don't think it came out too bad. A little bunchy perhaps. 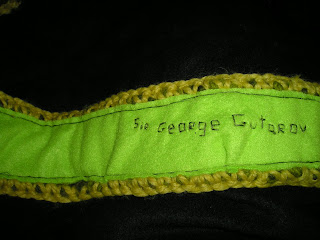 I also embroidered Georges name into it but it came out crooked! I let it stay that way though because I was lazy and I am a very inexperienced embroiderer. Also the main reason I embroidered his name into it was because I didn't want him to lose it in kindergarten, though upon further contemplation I realized that probably not many other kids would have a dragon hat and scarf ensemble.I lined the scarf and mouth with yellow yarn because I wanted to hide the edges of the lining a bit and also because I wanted to make the mouth part a bit bigger so that it was more proportional to the flame. 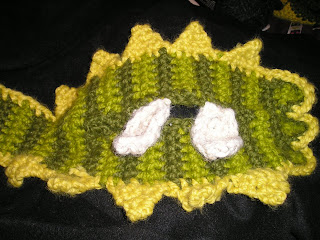 I also crocheted two teeth/fangs with thick and quick wheat colored yarn but I'm not sure I like how the came out all that much. The mouth itself was made by increasing stitches after wrapping it twice around my neck and figuring it was time. So I increased stitched until it looked wide enough for the fire to come through (which was around 14 stitches I think). Then when crocheting the next row, I only crocheted 6 stitches, then turned then crocheted another 6 stitches and I did that until it was long enough for the scarf to get through. Then I slip stitched down the middle side, slip stitched in the 7th and 8th stitch of that row and then singled stitched 6 stitches, turned, and repeated until it was approximately the same length as the other part. Then when it was the same length I just did one full row of color (14 stitches), 6 single stitches on each side and two chains in the middle.

Actually what I think would work even better, (because my mouth came out a bit too big and I had to stitch the two sides together at the top and bottom and also had to slip stitch around the mouth area), was if you didn't even skip any stitches, if you just single stitched 7, then turned and single stitched 7, and so on and so on, following the instructions above. I think that might look better and not end up as big as mine did. Though in my defense I was making this pattern up, and it WAS easy to fix.

The yellow scales around the mouth were just made by single stitching triangles with the base of 5 stitches, then fastening them off on top and starting a new triangle. I tried just single stitching down the side of a triangle after I was done with it, but then they weren't as sharp and I didn't want particularly rounded edges.

So there it is, my imagination brought to life! I hope you like it. I also really really hope he likes it!
Email ThisBlogThis!Share to TwitterShare to FacebookShare to Pinterest
Labels: crochet, crochet patterns, diy

I lost my camera

...In my room somewhere. I'm pretty sure. Very upset over that because I finished my little brothers dragon scarf on THURSDAY but my camera didn't have batteries in it so then I went to buy batteries.... and now I can't find my camera. AAHH!!! SO frustrating. It might be because my room is a mess because I just stocked up on some more yarn and fabric because both Michaels and JoAnns Fabric were having sales. I guess I'll finish my roommates hat and make a scarf for myself. Hmph. So upsetting.
Email ThisBlogThis!Share to TwitterShare to FacebookShare to Pinterest 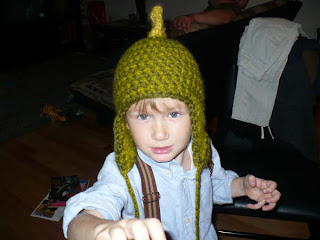 Thats him wearing it. Haha. I whipped it up in an evening, after visiting home and noticing that he is OBSESSED with Dragons right now. You should have heard the disgust in his voice after I offered to make him a Thomas the Train Engine hat. Apparently that's soooo 2 years ago.

By the way this is my little brother George. He is 5 (turning 6 in December). I am 20 and turning 21 in February. Fifteen years is a pretty big difference but he's one of my best friends.

I am also making him a Dragon Scarf, which as soon as I am done I will post photos up of. 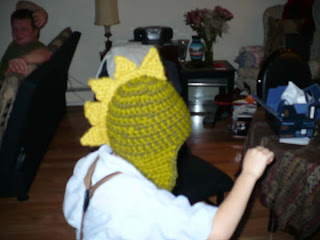 I crocheted it using a K/ 6.5 MM hook and Lions Brand Wool-Ease Thick and Quick yarn. Then I just crocheted some triangles in the same yarn just in yellow and slip stitched them to the hat. It sort of looks like a mowhawk.


I've had some demand for the pattern so here it is, (this is from memory since I'm back at school now and my lil bro is in Boston):

I used the Lemon-Grass and Cilantro colors for the hat and the Citron for the spikes. If you don't want to alternate colors then just don't switch colors every round, if you do then do! It doesn't really make a difference in terms of the pattern. This hat is worked continuously in rounds.

Continuing rounds: You can keep increasing stitches until the hat is the circumference you want, and keep repeating rounds till its the length you want. I don't quite remember what my brother's hat was, I think I made it a bit bigger because I'm planning on lining it with fleece.

The Earflaps are done working back and forth in rows.

Rnd 1: Sc in next 9 stitches (increase stitches according to size of ears or the size you want the earflaps to be)
Rnd 2: Ch 1, turn. Skip first st and sc in next 8 stitches

Then skip as many stitches across the back of the hat as you need (depends on hat size). Then work the second ear flap same as the first.

I also like to choose a dark color and sc all around the hat and earflaps. I think it gives it a more finished effect.

For the Scales (scales or horns? I'm not sure):

I crocheted 5 triangles independently and then attached them with two slip stitch lines on either side, so that they would stand up. I'm sure there are other ways to do it, but this was fast and efficient.

My triangles had a base chain of 6, but it really depends on what size you want your scales/horns to be. Here is the patterns for my triangles:

Continue repeating until only one stitch remains then fasten off.

Make 5 (or how many ever you want)

This pattern is pretty accurate, message me if there are any problems. And keep and eye out for my dragon scarf!

Wow this is probably really stupid, but I started making a hat for my mom in the same pattern and realized that I can make the rows spiral way prettier than they have been (if you tried the pattern you might have noticed that the change of color is sort of abrupt in the back of the hat). Basically you make the last st (usually a double stitch) of a row in the next color. Come out much better. I hope thats clear enough I'm not sure how to explain it better. I'll post photos of my moms hat (and hopefully scarf and mittens) as soon as I finish them.
Email ThisBlogThis!Share to TwitterShare to FacebookShare to Pinterest
Newer Posts Older Posts Home
Subscribe to: Posts (Atom)
An outlet for my obsession with interior design and crafting. I also tend to ramble.