I am so lazy. So so very lazy. I am finally back to having Wednesdays off and its amazing... except for the heart crushing feeling that I'm going to waste every single one being unproductive and silly. I could have gone to the beach! I could have gotten a tan! I could have walked along the Charles river taking photos of pretty birds! I could have made something! I could have written a blog about making something! Instead I creeped around the internet for a while, lusting over random interior design blogs and crafty diy projects and then this is a short list of what I did.

1. Watch random music videos that have come out.
2. Dance horribly for about 25 minutes until I catch a glimpse of myself dancing in the mirror.
3. Feel bad for myself.
4. Convince myself that its an evil fat mirror that used to be a wardrobe mirror so it basically doesn't count as a true reflection and in real life I'm probably AT LEAST 10 pounds lighter.
5. Dance for 5 more minutes in a subdued manner.
6. Talk to my Aunt about sex.
7. Clean the Kitchen!!!!
8. Give up on cleaning the kitchen because its hot and smells and I broke a nail.
9. Feel bad for myself and my nail.
10. Load the broken dishwasher.
11. Pray for it to work.
12. Wipe down the kitchen so it at least looks like I did something.
13. Go back to creeping random blogs on the internet.

I AM A HERO. But at least I've realized that my kitchen is slowly coming together and starting to look quite nice, and barely like its a rental kitchen. 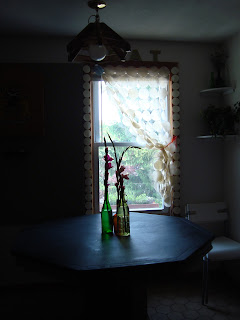 Tonight I made dumplings. I love dumplings. I LOOOOOOVE dumplings. So what if its a mite time consuming to make them from scratch? I mean I'm sure if I Google inspirational quotes at least 50% of them will be about how work/effort makes the resulting reward more amazing and blah blah blah. 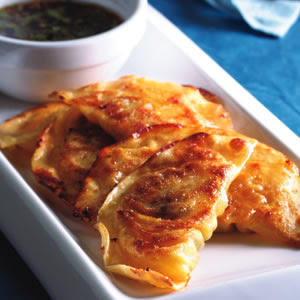 I mean, god that photo is making me salivate just looking at it. Thirty minutes of effort is surely worth this. Plus I would get MAD girlfriend points. That's how I convinced myself. That's pretty much exactly went through my head. In an effort to obtain extra girlfriend points I also changed from my work clothes to striped thigh highs and an over-sized sweatshirt because hell, might as well be the SUPER SEXY girlfriend that happens to also make her boyfriend dumplings from SCRATCH. Doesn't that practically make me a demi-goddess?
Oh GO ON! -->
Email ThisBlogThis!Share to TwitterShare to FacebookShare to Pinterest
Labels: cooking, food 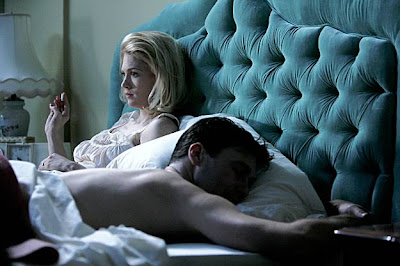 I mean, really. Need I say more?
Email ThisBlogThis!Share to TwitterShare to FacebookShare to Pinterest

While organizing the many many interior design photos that live on my desktop I have realized that I might be slightly obsessed with tufts. Alright. More than slightly. I've saved photos that have merely a glimpse of tufts in them. 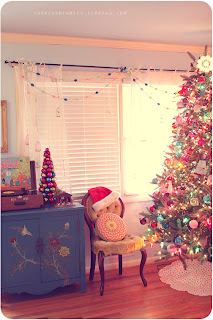 It is an adorable living room with beautiful decorations and lighting... but its the tufted chair. The one whose tufts are obscured by a santa hat and a pillow. I can only make out about four tufts but I was sold. Immediately. That's how deep my love for tufted ANYTHING is. I mean, I know I have already proclaimed my desire for a tufted headboard... But I have also realized another dream of mine is to own a tufted ottoman. I have come to this realization after discovering over TWENTY different photos of various tufted ottomans. Haha I don't think I've ever come to a realization about myself in quite such a manner. I'm a little embarrassed, truth be told and my only comfort will come from making you just as obsessed with tufted ottomans as I, apparently, am. 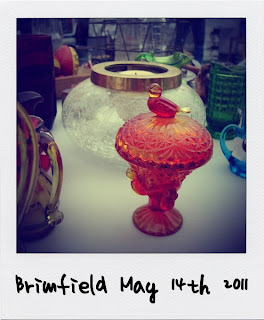 Some of my finds from Brimfield. I'm so glad I had the opportunity to get down there. I only wish I had more money and more time to peruse the many amazing bits and pieces that were down there. Still I got a pretty nice collection of painted glass and antlers!!


Oh GO ON! -->
Email ThisBlogThis!Share to TwitterShare to FacebookShare to Pinterest
Labels: antiques, antlers, brimfield, interior design
Older Posts Home
Subscribe to: Posts (Atom)
An outlet for my obsession with interior design and crafting. I also tend to ramble.